Welcome back for the third installment of our series on Open Broadcaster Software, an open-source and free Mac, Windows and Linux app that can be used for live or recorded video production. In the first installment, we discussed what OBS is all about and why it’s a good alternative to commercial apps. The second chapter of our story showed how to download and install the app, then make initial settings. Today, we’ll discuss two of the key ingredients in any video production: sources and scenes.

Cpu cooling app for laptop. Jun 29, 2017  Your Mac’s fans probably aren’t something you think about very often—until something goes wrong. Maybe you hear the fan too often, and it’s driving you nuts. Maybe you’ve stopped hearing your fan altogether, even when you Mac feels hot. Either way, you should probably look into that. For that, we recommend an app called Macs Fan Control. This free program lets you see the temperature of all. May 23, 2018  Double-click the Macs Fan Control app in Applications. You'll now see a list of Fans that you can manually override on the left and a list of current operation temperatures on the right. Let's for example decide that we want to make certain that our Mac gets the most amount of fresh cool air into the system. May 29, 2020  Download and install Macs Fan Control from MacUpdate. Launch the app and you will then have access to the fans and be able to see the temperatures of the components inside your Mac. Under 'Control' click 'Custom' and you can then use a slider to change the fan control on your Mac'. What's new in Macs Fan Control.

Sources are exactly what the name implies — the sources of video or audio content that is used in OBS to create a livestream or recorded broadcast. Scenes, on the other hand, are video canvases that are made up of one or more visual (and audio) elements from those sources. All of these elements can be resized, repositioned, or filtered. Many OBS users start with a single scene, then add multiple scenes to add production value to their streams or recordings.

Much of the power and flexibility of OBS comes from the variety of sources that are available to the user:

As you can see, there are a lot of ways to add visual and audio content to a scene! The variety of sources adds a tremendous amount of flexibility to your OBS productions. You simply need to learn how to mix and match those sources in your OBS scenes.

Now that we know where we can get all of the video and audio inputs — the sources — we can use them on our OBS canvas to create a scene. In this example, we’ll create two simple scenes — a “stream start” scene that is just a repeating promo for the stream we’re going to blast to the world, and a “talking head” scene for our announcer/host in which he/she will say various things with a lower-third title at the bottom of the screen.

1 – Launch OBS. If you haven’t installed the app yet, be sure to read the last article to find out more about installation and configuration. Here’s what the app window looks like:

2 – We need sources before we can have scenes, so let’s add a few easy sources. To do this, click on the + button below the Sources pane at the lower left. Of course we’ll need sound so that the host can be heard on the livestream or recording, so let’s start with an audio source from the menu that appears (see below):

Selecting Audio Input Capture, we can select Add Existing (Mic/Aux) to add the built-in microphone of a MacBook Pro to OBS as a source.

Now let’s add an Image Source. We’ll use a “card”, basically just an image we’ve created that tells viewers that we’re about to go live with the show. These can be created in many apps, both Mac and web apps like Canva. The card is 1280 x 720 pixels in size — basically 720p resolution.

I chose to create a new Image Source and named it “Going Live”. Selecting the file from the Downloads folder, it’s now available to OBS:

Now let’s add a live video source, and to make this as simple as possible, we’ll use the built-in FaceTime camera in a MacBook Pro. We add a new source, select Video Capture Device, create a new source we’ll name “FaceTime Camera”. We select the device (FaceTime HD Camera (Built-in) and use a preset resolution of 1280 x 720, once again 720p and the best resolution possible from this camera.

One more source to add before we start making scenes — a simple PNG “lower-thirds” title. PNG graphics provide for transparency, meaning that your title can “float” above the video in the background. There is a built-in text source in OBS, but I found that it was quite limited and also crashed the app if I tried to change the font! Once again, I used Canva to create a nice script font PNG lower-third in bright red, and created a new image source for it.

3 – Now that we have our sources set up, it’s time to create our first scenes. Actually, when we added the sources OBS created a default scene onto which all the sources were added. We actually want two scenes: the “Going Live” scene that we’ll show prior to going live (we’ll call this “Preshow Roll”), and the second with sound, the live video from FaceTime, and the lower-third title that we’ll call “LiveStream”. 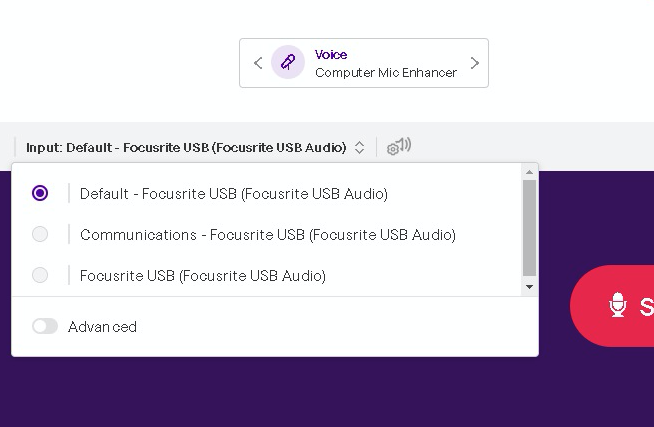 We can rename the existing “Scene” by right-clicking on it, selecting “Rename” from the pop-up menu, and typing Preshow Roll. Next, we’ll create a second Scene by clicking the + button at the bottom of the Scenes pane and naming it Livestream.

We have four sources and two scenes; we need to make sure that the proper sources are assigned to each scene. Our Preshow Roll scene has all four of the sources, but we really don’t need all of them. We’d like it to be “silent” (no sound input) so our viewers don’t need to hear us before the livestream goes live, and we just need that “Going Live” image source.

Click on Preshow Roll, then — using the minus sign ( – ) button — remove the sources you don’t need (Mic/Aux, Lower Thirds, and FaceTime Camera). Next, click on LiveStream, and make sure that the Mic/Aux, FaceTime Camera, and Lower Thirds sources are added. For all of these items, there will be an existing source that’s saved in OBS and just needs to be selected.

4 – At this point, make sure that you save everything. Oddly enough, there is no “Save…” menu item in the Mac version of OBS. What you need to do instead is save both a Profile and a Scene Collection that you can choose from the menu the next time you use OBS.

The Scene Collection holds all of the scenes and sources you have added, as well as any global sources. A Profile, on the other hand, holds all of the OBS settings but not scenes or sources. A profile can be built for each channel you’re streaming to (Facebook versus YouTube Live, for example) or for different recording or streaming settings. Any time a setting is changed in OBS, it’s saved to whatever profile is currently active.

To “save” the default Profile and Scene Collection you’ve been working with so far, select Rename from the Scene Collection menu and give it a name — I named my example “RocketYard Live”. Do the same with the Profile; here I gave it the name “Rocket Yard” (original, huh?).

In the next installment of this series, we’re going to talk about output from OBS in the form of either streams or recordings. Part of the discussion will be about transitions from one scene to the next, then we’ll make a short recording, and finally, we’ll set up a Facebook stream. In the meantime, have fun creating your own scenes and adding sources.

Related:
• Video Production with OBS: What It Is and Why You Should Use It
• OBS Chapter 2: Installing and Configuring the App